DrupalCon, the premier event of the Drupal Community, is a world-class technology conference held annually in North America and Europe. We had the privilege of working with the Drupal Association and the Drupal Community to create and implement a visual branding strategy for DrupalCon Denver, 2012.

With three packed days of sessions across 7 distinct tracks, pre-conference trainings, post-conference code sprints, numerous networking and social events, an exhibit hall, day stage, and round-table discussions, DrupalCon Denver presents a massive range of content and opportunities for people to connect with all aspects of a vital, growing open-source tech community. The North-America event draws several thousand technologists and business managers from all corners of the globe, and is an important venue for promoting open source technology across geographic and industry borders. The conference is organized and run by the Drupal Association and a host of incredible community volunteers.

In 2011, we were selected as the official design partners for DrupalCon Denver, 2012, with responsibilities including visual branding, website design, collateral, and signage design for the event. Building websites with Drupal has been a core line of service for Aten since 2006, and we were thrilled with the opportunity to help create and execute a visual branding strategy for this important event. The fact that DrupalCon was coming to our home town of Denver, Colorado, only added to the excitement.

In early strategy meetings we worked with the local community to establish a positioning statement for the conference. The community chose "Drupal Elevated", a play on Denver's mile-high elevation, a reflection of the current state of the technology, and a strong declaration of expectations for the conference experience. Ken Woodworth, Art Director at Aten, drew from this theme to establish a design direction that was dramatic and strong, leveraging sweeping mountain views and iconic photography of the Mile High City set against the rockies.

As one part of the overal effort, we were privileged to participate in strategy and execution for the official conference announcement. The event was announced onstage by Ben Jeavons, Justin Toupin, and Kevin Bridges at the closing session of DrupalCon Chicago, 2011, with a stunning slide deck featuring the best of Denver: sports, beer, mountains, and more. We designed stickers and postcards that were distributed in coordination with the announcement, along with signage. 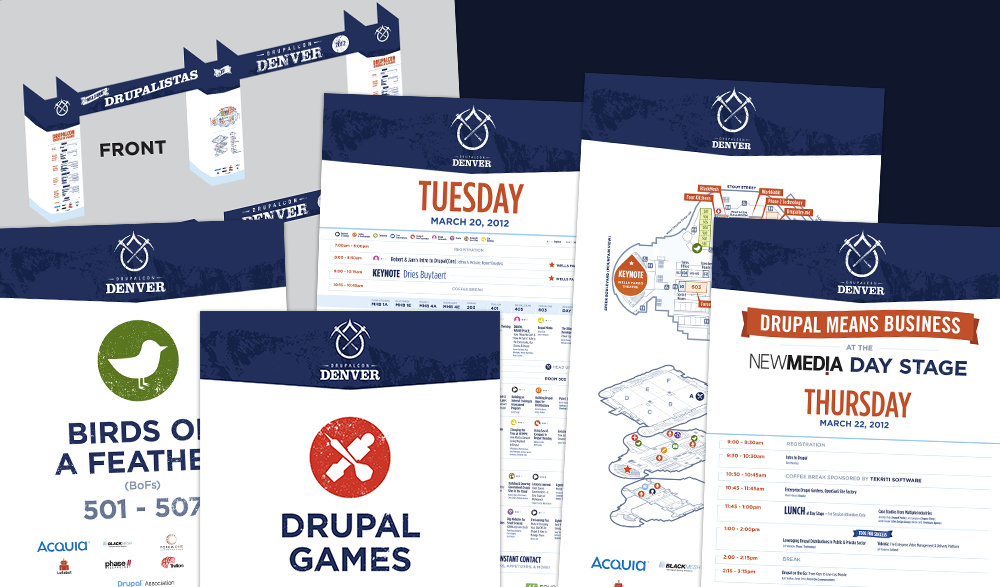 With seven tracks, nearly one hundred sessions, thousands of attendees, lunches, meeting rooms, presentation halls, after-events, and sponsor ads, the signage and print needs for the event were staggering. Ken worked with the Drupal Association and the Drupal Community to design each of more than one hundred individual signs for the event. The entire week-long schedule was laid out in booklet format, designed to be worn on a lanyard and double as both schedule and registration badge. We intially created the website as a single-page announcement for the event, with bold photography and content focussed on presenting Denver as the ideal destination for DrupalCon 2012. As planning moved forward, the website evolved to support the various stages of event organization -- from speaker promotion, to conference registration, to session scheduling, and beyond. Throughout the process, we provided art direction, design, and theming, coordinating efforts with a team of incredible community volunteers who built full conference organization functionality into the platform using COD, the Conference Organizing Distribution for Drupal. In line with the official theme for the event, "Collaborative Publishing for Every Device", the design was implemented with Responsive UI and targets a wide range of screens. Mobile use cases were considered for specific elements of the website -- for example, heavy phone usage was anticipated for the schedule page during the event itself, and was designed accordingly. The end result looks great on your computer, your tablet, and your phone.